What does ACRES want to see happen with regard to zoos?

ACRES is not an anti-zoo organisation, and we do not want to see all zoos closed down.

However, sadly – in many zoos – animals are kept in substandard conditions. In certain cases, some, or sometimes most or even all – of the needs of the animals are not met, causing them to experience poor welfare and to suffer.

We want to see this end.

We want to see all zoos ensuring the best possible welfare for the animals in their care.

We feel that we have a responsibility to do whatever we can to give animals in zoos a better life.

That’s why we want to work together with zoos and similar captive animals establishments, as well as zoo organisations, to make things better for the animals living in zoos.

What does ACRES do?

So, how does ACRES help the zoo animals whose lives need to be improved?

To assess the welfare of animals at a zoo we conduct a Zoo Survey. This is a detailed examination of the living conditions of the animals by which we can assess whether their Five Freedoms are being met, and therefore whether there are likely to be welfare issues for the animals. You can read about how we conduct Zoo Surveys in more detail here.

After we conduct a Zoo Survey, we will write up our findings and observations in a report.

Working with zoos and the zoo industry

If we do have concerns about any aspect of animal welfare at a zoo, we will contact the zoo and try to arrange a meeting with them to discuss our concerns and make recommendations as to how the welfare of the animals they keep can be improved.

As well as working with individual zoos, ACRES also strives to work with zoo associations, both regional and international, to share knowledge and ideas about zoo animal welfare and to bring the issue of zoo animal welfare to the forefront of all of our work, with the aim of working together to eradicate poor conditions in zoos where necessary and improve the welfare of animals in zoos as needed.

Since 2008, ACRES has held capacity-building workshops on zoo animal welfare in Malaysia, Thailand and Singapore for NGOs, government agencies and members of the public. These workshops equip them with the skills and knowledge to conduct their own Zoo Survey work and work together with the zoo industry to address zoo animal welfare concerns. 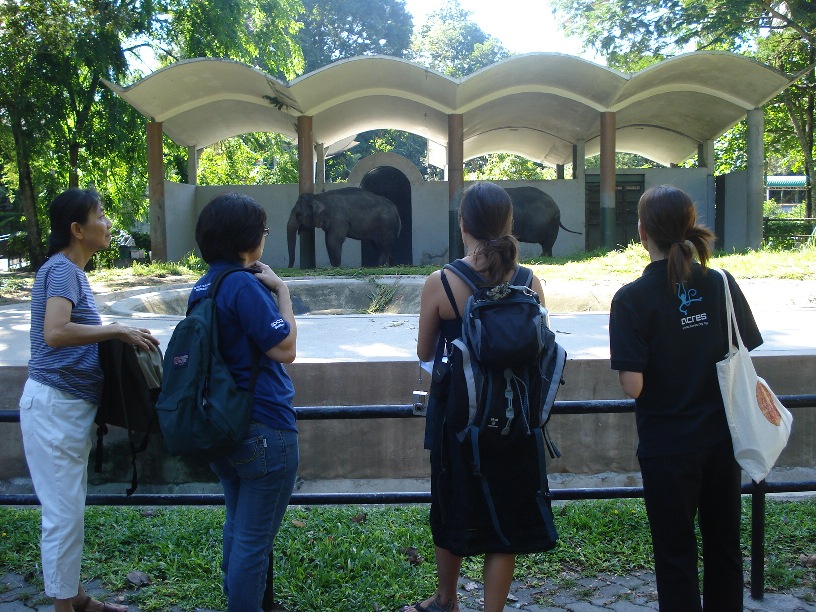 How else can zoo animals be helped?

We believe that all governments should have adequate laws in place to protect zoo animals, improve their welfare and regulate zoos. We lobby for and support any improvements to existing legislation or new legislation that will improve the welfare of zoo animals.

Ending of outdated and cruel practices

What has ACRES done to help zoo animals?

Since 2001, ACRES’ efforts and working together with the zoo industry have led to the improved welfare of many animals in zoos in Asia.

In 2002, our investigations and positive collaborations with zoos resulted in great improvements to the living conditions of chimpanzees at zoos in Malaysia, Indonesia and China, who had been found living in wholly substandard conditions. The chimpanzees had been sent to these zoos by the Singapore Zoo and, after meeting with us to discuss our concerns, we were pleased when the Singapore Zoo assured us that they would improve their animal exchange protocol.

In 2004 we began discussions with the Singapore Zoo with regard to improving the living conditions of the polar bears held there and were pleased when some improvements to their enclosure and husbandry were made, such as the installation of shade cloth over and mist fans around the enclosure, and allowing the polar bears access to a small air-conditioned area. However, our concerns for the welfare of the bears remained, particularly with regard to the unsuitable tropical climate they were housed in and their small, barren enclosure. In 2005, we conducted a detailed study into the welfare of the polar bears and published our report “What’s a Polar Bear Doing in the Tropics?” Meetings with the zoo followed, and in 2006 we congratulated the zoo when it announced that, once Sheba and Inuka pass away, they will be phasing out keeping of Arctic animals.

We were pleased in August 2010 when the Singapore Zoo announced that they are building a larger enclosure for the polar bears. The enclosure will have certain climate control features, which will make certain areas cooler for the bears, and areas of soft substrate too, which are all improvements that ACRES has recommended for several years. However, ACRES continues to urge the zoo to relocate Inuka, the younger male polar bear, to a facility in a more suitable climate once Sheba passes away.

In 2006, we began raising awareness on captive polar bear welfare in Asia at various international conferences.

In 2003, ACRES raised our concerns with regard to cheetah petting sessions that had been started at the Singapore Zoo. We felt that the welfare of the cheetahs would be severely compromised by such sessions as enforced contact with humans, which they could not choose to avoid, could be highly stressful for them. We met with the zoo to discuss our concerns, for both the welfare of the cheetahs and human safety, and were delighted when, the day after our meeting, the zoo announced that they would be ending the cheetah petting sessions.

Concerned with the continued use of animals in the circus-style “Spirits of the Rainforest” animal show at the Singapore zoo, including an orang-utan ‘performing magic tricks’, in 2005 we campaigned against the show and met with the zoo to discuss our concerns. We were delighted when the zoo soon afterwards changed its show to one which is focused on natural behaviours.

ACRES continues to urge the Singapore Zoo to eliminate the unnatural tricks and demeaning elements from their “Elephants at Work and Play” and “Splash Safari” shows.

ACRES urges every zoo to end any show featuring unnatural tricks or that demean and trivialise the animals in any way.

In 2008, we conducted our first survey of animal welfare standards at major zoos in Malaysia and Singapore. We were delighted when Zoo Negara implemented many of our recommendations to improve the welfare of the animals, including stopping the elephant shows and releasing the elephants from their chains.

In 2009, we conducted an extensive survey of the welfare standards at 39 zoos in Peninsular Malaysia. Together with WSPA (World Society for the Protection of Animals), Malaysian animal welfare groups, the Malaysian government and the zoo industry, we are continuing to move forward to improve zoo animal welfare at certain zoos in Peninsular Malaysia. You can read more about the ACRES Malaysian Zoo Animal Welfare Programme below.

In 2009, ACRES was invited to conduct a Zoo Survey of zoos in Thailand, and are continuing to work with various organisations in Thailand on zoo animal welfare issues.

ACRES continues to urge the Singapore Zoo to improve the welfare of the animals there, and are currently urging the zoo to make improvements to their substandard ocelot and cougar enclosures as soon as possible.

Most recently, in October 2009 we presented on our Zoo Animal Welfare work at the WAZA (World Association of Zoos and Aquariums) conference in the USA, and in March 2010 we presented again at the ZAA (Zoo and Aquarium Association) conference in Australia. Through these presentations we raised awareness amongst the global zoo community about the need to improve welfare standards at certain zoos. We received an extremely positive reception at both of these conferences and much support for our Zoo Animal Welfare work.

Responding to the concerns of members of the public

ACRES frequently receives feedback from members of the public who are concerned with poor animal welfare standards at certain zoos and other captive establishments in the region. ACRES always follows up on these concerns and works together with related partners to address the problems as best we can. 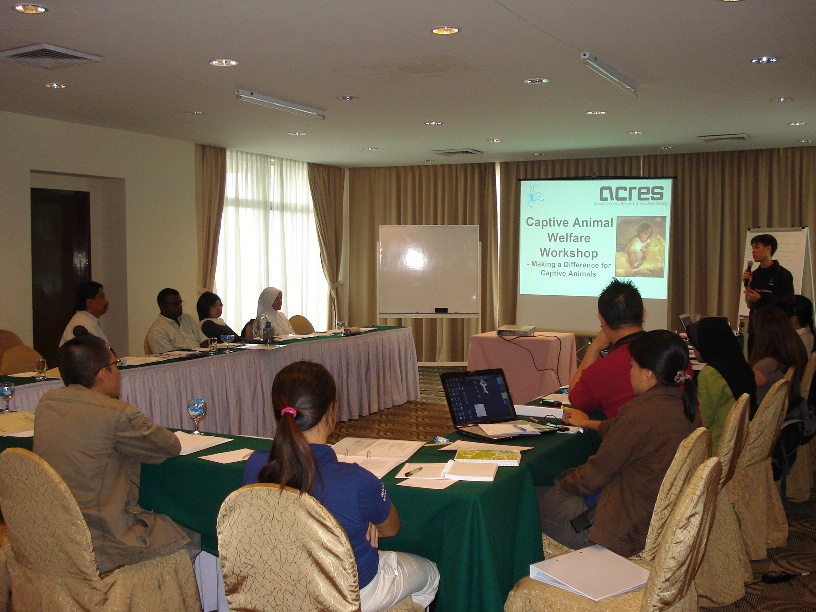 In recent years, zoo animal welfare issues have been receiving increasing public attention in Malaysia, with more and more Malaysians raising their concerns about the poor living conditions for some animals and cruel practices at certain zoos there.

Our approach to improving zoo animal welfare standards in Malaysia involves collaborating with several other parties, including Malaysian NGOs, the zoo industry- in particular MAZPA (Malaysian Association of Zoological Parks and Aquaria) and SEAZA, and the Malaysian Department of Wildlife and National Parks, known as PERHILITAN.

Shortly after completing our survey of welfare standards at 39 zoos in Peninsular Malaysia we met up with Dr. Kevin Lazarus, Chairman of MAZPA, to present the findings of the investigation. Since then have held further meetings with MAZPA to discuss ways forward to improve welfare standards at Malaysian zoos.

In October 2009 we were invited to participate in the MAZPA Keeper Training Workshop in Malaysia, where Hafz’zan Shah, Animal Caregiver at the AWRC, gave a presentation on the work of ACRES to keepers and other zoo staff from many of Malaysia’s zoos. Since the workshop we have been sharing our environmental enrichment resources with zookeepers from several zoos, to assist them with improving their enrichment programmes for the animals in their care.

The first was held in June 2009 and attended by representatives of several Malaysian NGOs, including Friends of the Earth Malaysia, SPCA Johor, SPCA Penang and SPCA Selangor, as well as veterinarians and a representative from a Malaysian zoo. At the workshop we discussed zoo animal welfare in general and highlighted the needs of wild animals in captivity. The workshop equipped participants with the skills and knowledge to conduct their own zoo survey work and develop their own zoo animal welfare campaigns and programmes. We also presented the results of our investigation into the welfare standards at 39 zoos in Peninsular Malaysia, to highlight the areas of concern.

The second workshop was held in March 2010 and was attended once again by representatives from several Malaysian NGOs, and also by representatives from PERHILITAN (the Malaysian Department of Wildlife and National Parks), MAZPA and some Malaysian zoos. The workshop once again covered the welfare and needs of wild animals in captivity, how to conduct zoo surveys and assess the welfare conditions at zoos, and highlighted the areas of concern regarding Peninsular Malaysia’s zoos, as revealed by our 2009 investigation. Two days of roundtable discussions about the Malaysian Zoo Animal Welfare Programme followed the workshop, with all parties involved discussing and formulating an action plan to begin addressing the problem of poor animal welfare at some of Malaysia’s zoos.

We look forward to continuing to work closely with PERHILITAN, MAZPA and Malaysian zoos, as well as the various Malaysian NGOs, towards a day where all zoo animals in Malaysia experience the best possible welfare in captivity.

In July 2009, ACRES, together with Malaysian organisations SPCA Johor and Friends of the Earth Malaysia, met with PERHILITAN Johor and YB Tan Kok Hong of the State Exco Council to discuss our concerns about the brutal treatment of this tiger, as well as our concerns regarding the substandard living conditions for animals and cruel practices at all three zoos in the state of Johor.

PERHILITAN stated that they would be looking into all of the issues raised. We have since been informed that the tiger photography sessions at Danga Bay Petting Zoo have been stopped. 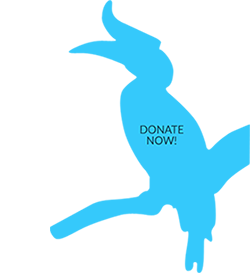