Wild animal parts have been used in some TCM (Traditional Chinese Medicine) preparations for hundreds or thousands of years. Sadly, the huge demand for animal parts, such as bear gall bladders and bile, rhino horns and tiger bones, has driven these animals to the brink of extinction.

It has also resulted in bears being farmed for their bile- kept alive in appalling conditions on bear farms and having their bile painfully extracted. Tigers too are beginning to be farmed in terrible conditions in China for their bones and other parts to be made into tonics and potions. You can read more about the bear bile industry and the cruelty of bear farming here.

Today, bears, tigers and rhinoceroses are protected by international laws and treaties and the international trade in their parts is mostly banned. Most countries have domestic laws too prohibiting the sale of these animal parts. In Singapore it is illegal to import, sell, own, or advertise for sale any bear, tiger or rhinoceros parts.

Many TCM practitioners worldwide are shunning the use of endangered wild animal parts and using herbal alternatives instead. However, there remains a thriving black market for wild animal parts for use in TCM, and endangered species parts can sell for very high prices.

ACRES campaigns to end the use of wild animal parts in TCM by: 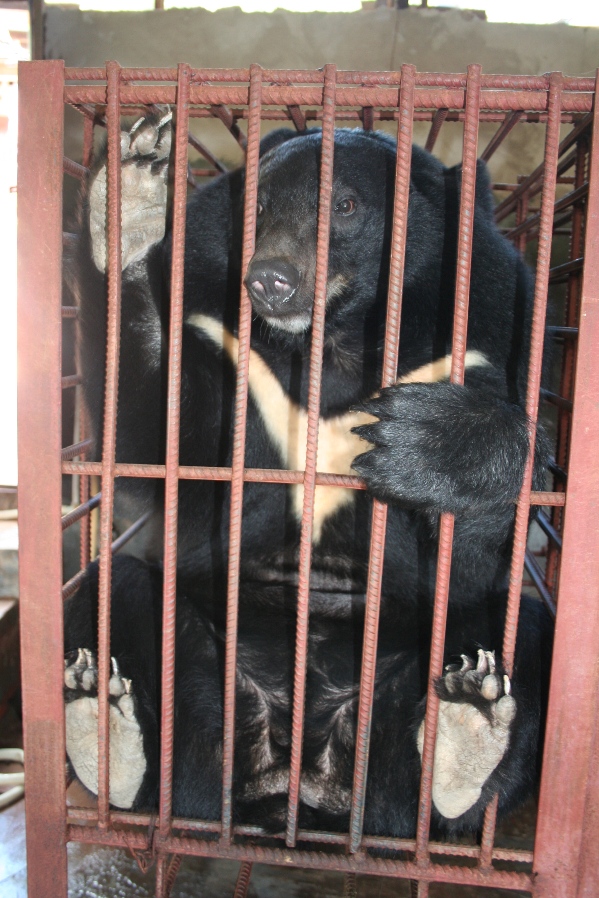 Typical living conditions for a bear in a bear farm.

ACRES conducts regular undercover investigations into the illegal trade in bear parts and tiger parts by TCM shops in Singapore, which have resulted in traders who were found illegally selling and/or importing these parts being prosecuted, as well as a noticeable decline in the levels of illegal trading of bear products. 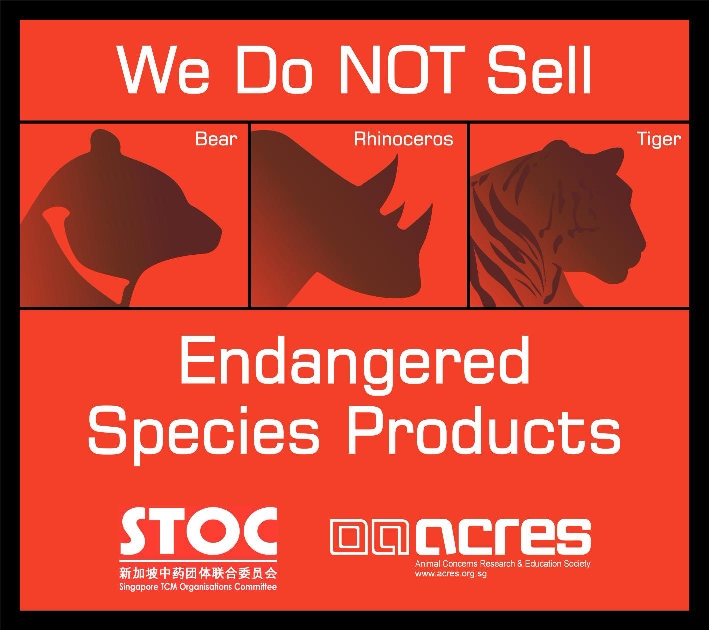 Label displayed by shops that sign up for the ACRES & STOC Endangered Species-Friendly Labelling Scheme. 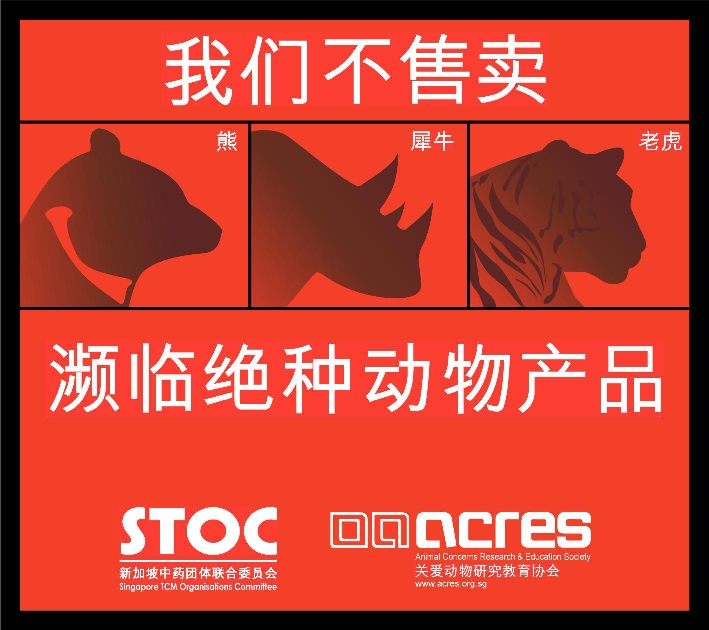 On the 1st March 2006, ACRES and the Singapore TCM Organisations Committee (STOC) launched a joint scheme, the “ACRES & STOC Endangered Species-Friendly TCM Labelling Scheme”, which aims to end the trade in endangered species for Traditional Chinese Medicine (TCM) in Singapore.

This labelling scheme is funded by the Animals Asia Foundation.

At the launch of the scheme, Mr. Lee Tiong Sa, Chairman of STOC said: “STOC and its members have been in support of the protection of endangered species. However, there still seems to have trading activities of endangered species product in the market. By participating in this labelling scheme, we can create more awareness of the need to protect endangered species among the traders as well as the general customers. This also reaffirms our commitment to the cause.”

TCM plays an important role in providing complementary health care to Singaporeans. It is part of a great historical tradition and the culture of many Chinese Singaporeans and must be preserved. ACRES welcomes the opportunity to work together with STOC towards the eradication of the illegal use of endangered species in TCM in Singapore and the promotion of herbal alternatives to products such as bear bile. 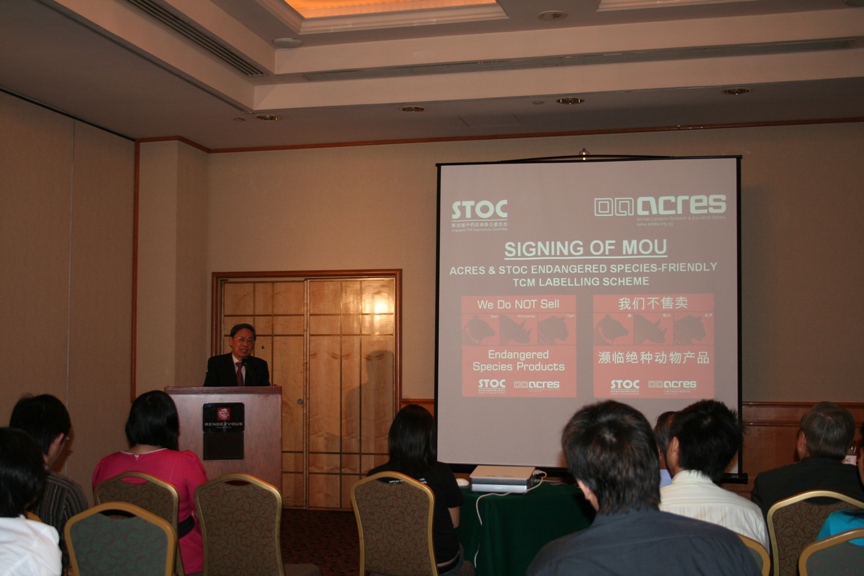 Raising awareness on the illegal trade in bear parts in Singapore and the cruelty behind the bear bile industry.

A local consumer demand for bear-derived TCM products became apparent after our 2001 undercover investigation into the bear parts trade in Singapore. As a result ACRES, in collaboration with WSPA, set about an ongoing public awareness campaign. The campaign highlights the fact that not only is the trade in bear products illegal in Singapore, but also stresses the extreme cruelty inflicted on the bears at the bear farms from whom bear bile and gall bladders are obtained. The aim of the ongoing campaign is to make people aware of the cruelty involved in bear farming, encourage them to use herbal alternatives to bear bile and therefore reduce demand for bear bile products.

A life-size mechanical bear in a cage – which graphically illustrates the extreme cruelty of farming bears for their bile – has travelled to schools, universities, public venues and roadshows all over Singapore since 2001, raising awareness on the cruel bear bile industry among tens of thousands of people.

Since the beginning of the campaign, several people who did take bear bile medicines have informed ACRES that, after learning of the extreme suffering endured by bears on bear farms, they will no longer use these products. In 2001, thousands of Singaporeans signed have a pledge never to use bear bile, bear gall bladders or other products derived from bears. 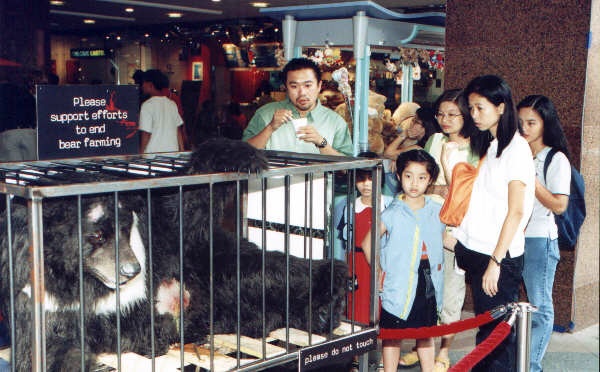 Curious onlookers learning about the horrendous conditions on bear farms.

The illegal trade in bear parts and the cruelty of bear farming has been highlighted in hundreds of ACRES talks all over Singapore, especially at schools and universities. 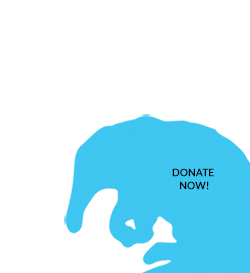